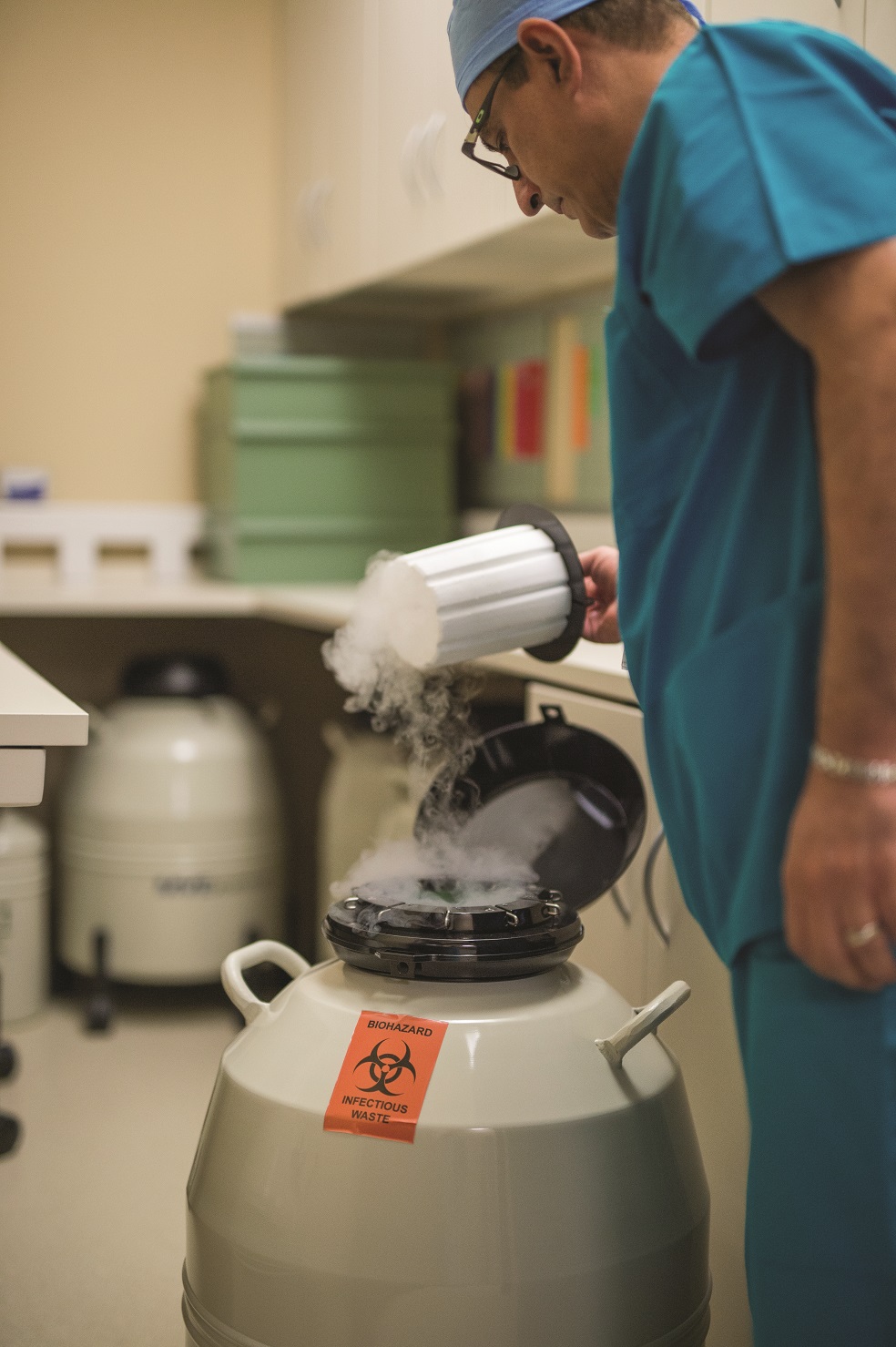 Fertility Preservation Represents Hope of Having Children in the Future

30 July 2017, Abu Dhabi – UAE: Fertility Physicians in Abu Dhabi successfully managed 15 cases of unmarried young women and men at risk of infertility in the future for different reasons, including the diagnosis of intractable diseases or autoimmune diseases that require long-term treatment that affects their fertility, or recurrent surgeries on female’s reproductive organs due to recurrence of endometriosis, or because of delayed marriage due to social or economic reasons which may also affect the quality of eggs. Physicians were able to preserve their eggs and sperms using the latest techniques before the patients started treatment sessions which gave them hope to have children after marriage in the future.

Dr. Elsamawal El Hakim, Consultant Reproductive Medicine & IVF at the HealthPlus Fertility Center in Abu Dhabi, part of United Eastern Medical Services, said “during the past two years, we have noticed many young people who required medical intervention to preserve their eggs and sperms for reproduction in the future as a preventive measure due to their need to undergo treatments that may lead to the destruction of cells producing eggs and sperms, as well as cases of delayed marriage which is accompanied by a decrease in egg production.”

He added that there were 12 single females and 3 single males out of the total cases that have been managed during the past three months, stressing on the fact that the eggs in some cases are collected from unmarried females using advanced techniques by laparoscopy when necessary. Such cases for single females required prior approval by the relevant health authorities, and all of them had received the approval given their health conditions.

“Because of the availability of such advanced techniques, the pregnancy is not impossible for young people who suffer from intractable diseases before marriage, or those who are late in marriage for many reasons, noting that the preservation of their samples represents a new hope for these people to have children in the future,” Dr. El Hakim added. “There are many intractable diseases, including cancers, which cause difficulty to have children when receiving their treatment courses due to the adverse effects of their medicines on the production of eggs and sperms.”

“One of the patients we saw at HealthPlus Fertility Center in the past three months was a 26-year-old Arab female who was diagnosed with breast cancer and required chemotherapy and radiotherapy, which would affect negatively the patient's production of eggs and the ability to conceive in future. With her parents’ consent, the patient requested to preserve a number of eggs before the start of treatment, which we managed and 12 eggs were preserved before the start of chemotherapy and radiotherapy,” he said.

Dr. El Hakim also said, “the second case was a 29-year-old male who had leukemia. His oncologist planned chemotherapy and radiotherapy sessions for him and advised him to go for semen freezing. “So the young man had visited us at HealthPlus Fertility Center for his fertility preservation, and two samples were actually preserved, with 20 million sperms in each sample.”

He said that amongst other cases was a young unmarried Emirati female in her mid-30s who was pursuing her postgraduate studies abroad. Her medical examination showed that her eggs production has started to decline. Therefore, she decided to preserve a number of eggs in the center in the hope of future childbearing. 16 eggs have actually been preserved for her.

“All these preventive treatments are applied to married and unmarried individuals using different advanced techniques depending on their cases giving them the opportunity to have children in the future,” he added.

He also explained that the samples are preserved through very accurate electronic system, under a temperature of up to 194 degrees below zero using liquid nitrogen gas. They are preserved for 5 years, then renewed.

From his side, Majd Abu Zant, Chief Operating Officer at United Eastern Medical Services and CEO of HealthPlus Network of Specialty Centers said, “HealthPlus Fertility Center has a success rate of more than 45.2%, which is equivalent to the international success rates. This percentage qualifies the center to provide different treatment services for couples suffering from delayed pregnancy, infertility problems, and cases of repeated miscarriages, in addition to men or women who need to preserve their fertility before undergoing chemotherapy or as a result of delayed marriage for social or economic reasons. The Center also receives couples who need genetic tests prior to IVF to exclude any genetic diseases or other cases that can affect the fetus. He pointed out that the center performs more than 2670 infertility treatment sessions annually, and samples of eggs or sperms for more than 3000 patients are currently preserved at the center, in accordance with the international standards.”

Aldar and HealthPlus Raise Awareness of the Most Common Women’s...